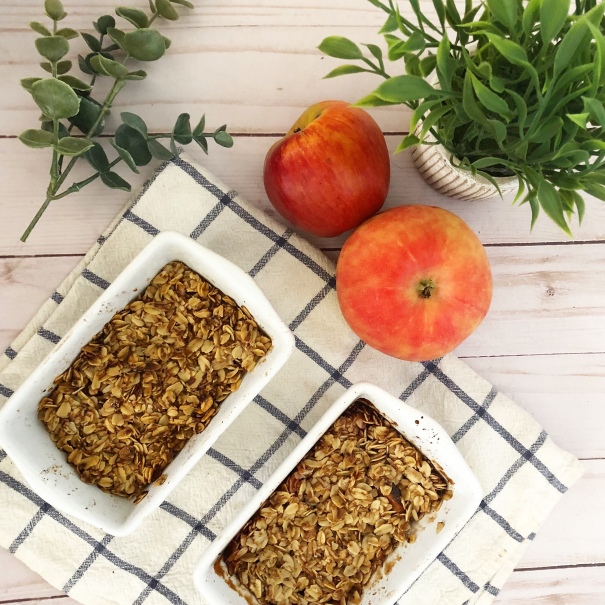 It’s fall so naturally I feel obligated to buy apples and cook things with cinnamon. Fun fact, I actually didn’t used to like cinnamon before I went vegan so I’m wondering if my recent conversion is due to a change in taste or a desperate longing for flavorful food. (Jk, vegan food is flavorful) (but is it?) (yes, it can be, but usually I’m too lazy to make it good) So anyway, if you’re looking for something to make you feel festive, have a bunch of apples lying around or if you’re just looking for a way to make your house smell like you massacred a gingerbread man, you’ve come to the right place. 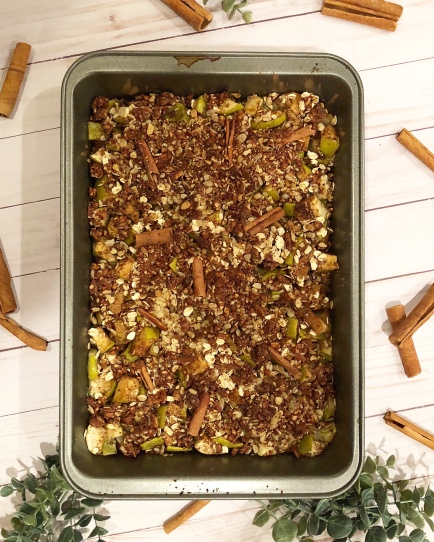 I have concocted a healthy-ish apple crisp recipe! YAY! Usually I preface “healthy-ish” recipes with a little disclaimer about how they aren’t really healthy but are simply more healthy than their full fat, processed to death and dairy laden alternatives but this recipe requires no such disclaimer because really, it’s actually not bad for you! Shocker, I know.

I was inspired to whip this up one night when I looked over my fence and saw a HEFTY lookin’ apple tree in my neighbors yard. You can probably guess where I’m going with this but it’s not *quite* as illegal as you probably think. My neighbors moved and their house is a. demolished and b. still for sale so nobody is eating these apples except deer. And now me. So anyway, my sister and I scurried over in the cover of darkness and helped ourselves to some contraband. The apples in question were medium sized, really green, really tart and just generally back-yard-apple-y (absolutely, definitely not a word or even an acceptable phrase but we’re keeping it). I thought because these were kinda measly looking fruits that the dessert wasn’t gonna be great but in fact, this one tasted better than any of the later versions so if you have access to illegal (or legal) crab apples I would definitely recommend using them.

I tried a few versions of this recipe and tweaked it each time to make it healthier, crunchier, better, etc. I’ll include these little variations at the end but all in all, each batch turned out super edible. THAT’S A WIN. No but really, they turned out good and each used minimal and decent ingredients.